In a previous article we discussed the fandom spectrum and how it affects what fans like and how they prefer to participate in fandoms. [https://the-swsc.com/2021/03/24/the-fandom-spectrum/] This article aims to discuss how the fandom spectrum can be used to understand what fans don’t like about new entries in their favorite franchises and what generally leads to fandom backlash. This article isn’t going to be delving into external factors such as known studio interference, but rather will be looking at factors internal to new additions to popular stories that have a tendency to rub fans the wrong way. 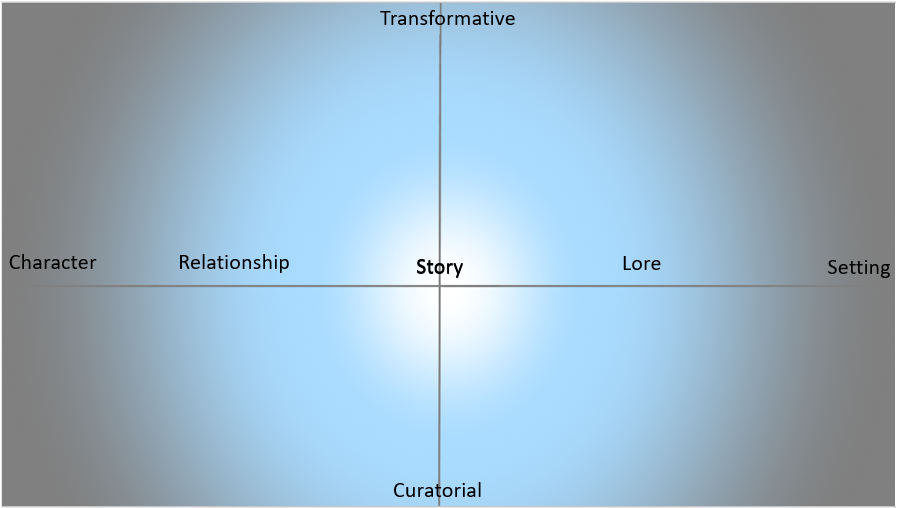 Relationship fans tend to dislike discontinuity in relationship arcs.  As with Character fans, relationship fans are all for their favorite character dynamic growing and changing, becoming strained, reconciling, etc. but how that relationship develops needs to fit with how the characters involved are developing. As with character development changes in the trajectory of a relationship need to flow naturally from events that serve as catalysts.

Story fans tend to dislike plot holes and outright contradictions in the overall story. If you want to keep Story fans happy don’t leave plot points unexplained and make sure that descriptions that appear in multiple places line up unless there is a good reason for them not to. Story fans also tend to dislike contradictions in theme and tone.  If the franchise has a running theme throughout, then throwing that theme out in favor of a new theme will not make Story fans happy.  If the tone of previous entries in the series has been sincere, a cynical entry probably isn’t going to go over well.  If the previous entries have been gritty, making the next entry campy isn’t going to go over well. Etc.

Lore fans dislike it when the rules of the fictional universe are broken.  Fiction regularly laughs in the face of conventional physics but each fictional world typically has its own internal rules for how things in the universe function whether that be technology, magic, superpowers, etc.  Breaking those rules really annoys Lore fans.  Lore fans also tend to really dislike when things are introduced to the story that are so overpowered they beg the question of “why don’t they always just do that?” even if it doesn’t technically break the rules.  If a writer absolutely must give the heroes an overpowered card to play as the only way to get out of one specific situation they need to explain why that solution can’t be used again or can only be used very very rarely. If an antagonist can be defeated or a difficult problem solved by doing something incredibly easy when a similar villain or problem shows up, Lore fans will feel strained disbelief when the heroes suddenly don’t go for the easy solution that worked before unless it’s explained why it can’t work again.

Setting fans tend to dislike discontinuity in setting.  Just as character fans like their favorite character for certain attributes, Setting fans like the setting of their favorite story for certain reasons.  Setting fans want reassurances that each new entry in the series is taking place in the same setting that they’ve come to love.  They absolutely want to see new places and new people, creatures, technology, etc. but they also want elements of the familiar to be thrown in to remind them that what they are seeing is still the same fictional universe.  They want the story to occasionally revisit favorite places.  If the setting has say recurring magical creatures or aliens, then setting fans want those species to continue to reappear in future installments rather than showing no new magical creatures or aliens or only new magical creatures of aliens.  They also want a certain continuity of aesthetic.  If there’s a major change in the overall aesthetic they want a well explained reason why.

For Character fans, if the previous installment of a franchise left their favorite character looking forward to an interesting future they want to see what that future is.  Neglect in this case comes in two forms: sidelining the character so that they don’t live up to their potential, leaving large gaps in the character’s story when interesting things were presumably happening to them, or just not continuing that character’s story at all.

A note on Shippers: Shippers are a subset of Relationship fans.  They can feel that their desires are being neglected if their favored ship does not become canon.  However, if a story is particularly clear that one romantic pairing will be canon or that others won’t be Shippers of pairings other than the canon pairing tend to realize that they are part of the Transformative part of fandom.  Those that realize they are part of the Transformative part of the fandom will tend to be content with canon giving them scenes with their favorite characters together that they can use as the basis for fanfiction and fan art.  If, however, canon is vague about romance or if a love triangle is introduced, that tends to spark heated arguments between the various shipping factions.  At that point it is likely impossible for the content creators to appease every faction.  If including a particular romance doesn’t result in discontinuities or neglect in other aspects of the story there is usually no harm in including it.  If, however, forcing a certain romance into the story just to please a faction of shippers requires discontinuities or neglect in other aspects of the story that romance shouldn’t be included.

For Story fans, neglect involves interesting plot lines that are introduced but either don’t go anywhere or story lines that are dropped without resolution.

For Lore Fans, neglect is adding new entries to the series that don’t expand the lore or briefly introducing new things to the lore but not explaining them.

For Setting fans, neglect is when new entries in the series don’t take the story to any new places or when the new places that the story does go to are too similar to places the story has previously visited.  Neglect for Story fans can also involve introducing certain facets of the setting but then not exploring them in depth.

Both Discontinuities and Neglect and other causes of fan annoyance can come from two sources. The first is just bad writing which can be due to a number of things including laziness on the part of the writer or the writer’s lack of talent.  The second shows up when the writer is asked to continue a franchise they themselves are a fan of. If the writer is a fan of the franchise then they fall somewhere on the fandom spectrum.  If the writer themselves leans to a far side of the spectrum the content they create will likely reflect that and if they aren’t careful the result will be that they will incur backlash from fans that occupy other areas of the spectrum.

Character fans want the series to essentially be the biography of their favorite character(s).  They tend to see the setting as simply a colorful background against which the characters live out their lives.  As such, if someone who leans heavily toward the Character side of the spectrum is tasked with writing a new entry for a series they will be more prone to write discontinuities in the setting or to neglect the desires of Setting fans. Someone that leans toward the Character side of the spectrum has a good chance of writing a story that will appeal to Relationship, and Story fans because continuing the story of a previously established character likely means that previously established relationships and plot lines will also be continued.

Setting fans want the series to explore the setting to its fullest and see characters more as audience surrogates that allow the audience to explore their world through their eyes.  Setting fans would prefer the franchise to be an anthology series that focuses on a number of different characters spread throughout time and space in their preferred fictional universe.  If a writer leans too far toward the Setting end of the spectrum, however they risk annoying Character, Relationship, and Story fans. The anthology series that such a writer would create would mean that previous characters, relationships, and plot lines would be set aside with each new entry in the series while Character, Relationship, and Story fans would want those things to continue.

How can a story lean too far toward the Curatorial side of the spectrum when every new entry in the series is ultimately a transformative act? There are two ways that it commonly happens.  One is when the series becomes too formulaic where each new entry feels like it’s just a variation on the plot of previous entries.  Adhering to a formula too frequently or too strictly can result in frustration among the more transformative side of the fandom that would like the series to break the mold and do something different. The other way that a new entry in a series can lean too far toward the Curatorial side of the spectrum is the overuse of references and Easter eggs.  Curatorial fans love references and Easter eggs because it rewards their memorization and knowledge of canon.  References and Easter eggs can be fun things to add to a story but the whole point of an Easter egg is that you should have to hunt for it.  If a new entry in a series is just one obvious Easter egg or reference after another it can break the immersion of the audience because now they aren’t engaged with the story they are just waiting for the next Easter egg to pop up.

If a content creator leans too far toward the Transformative end of the spectrum they risk creating discontinuities across the Character to Setting spectrum and risk incurring backlash from any fans that either are unhappy with the discontinuities the writer is creating or just aren’t happy with the transformations that the franchise undergoes.  Fandoms tend to be more tolerant of extremely transformative writing in spinoffs about new or side characters or if they have otherwise been sold on the idea of the new entry in the franchise being a highly transformative take. (Side note: if you are adapting a work of fiction from one medium to another that is transformative by its very nature.  The fans though are always going to in effect lean Curatorial and will want the adaptation to be as faithful to the source material as possible. If a creator wants the fans to like their adaptation, it’s never a bad idea to be more faithful to the source material.) By contrast, a direct sequel that continues unresolved story lines from the previous entry in the series is generally a very risky place for a highly transformative story.  If the writer wants to transform a story in the middle they need to take great care to make that transition as smooth as possible.

Ultimately a good new entry in a series will push the boundaries of the franchise but not to the breaking point or beyond. If the writers want to season that story with a few Easter eggs, so much the better. The best way to compromise between the Character and Setting end of the Spectrum is an interconnected universe that focuses on multiple characters that each have their own stories but that also occasionally have those stories intertwine with those of the other characters.

The SWSC ShadowCast Is Now On iTunes!